It’s been a real pleasure working on the Painted Caribou-Skin Coats Project with the Aanischaaukamikw Cree Cultural Institute in Ouje-Bougoumou, Quebec.

After a trip to see ancient painted caribou-skin items in the Royal Ontario Museum in August, 2019, I wondered what it would be like to make my own paint from ingredients I gather from the natural environment in Eeyou Istchee. As soon as the snow started to melt this spring of 2020, I began to gather some of the ingredients. In this article, I share the process I went through during the beginning of my experimenting with making my own paint pigments. 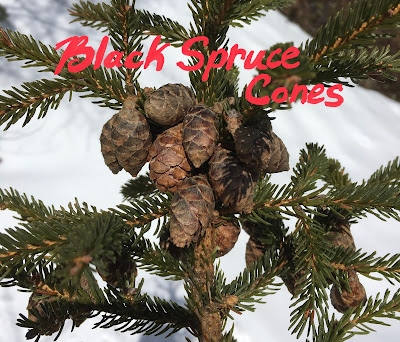 The Black Spruce tree cones of Eeyou Istchee make a brilliant brown dye. The cones grow in clusters and are found at the top of the tree. It was early April when I picked the cones, while they have a dark purple green and brown hue, before opening to drop their seeds. When I was a young woman, my mother pointed at them in the late fall and said, ‘A long time ago they used to boil them to make a dye to color their fishnets’. In the fall the cones are more purple. 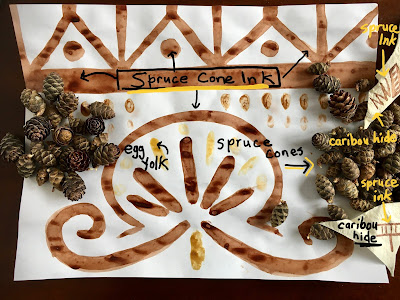 This picture is an example of what the spruce cone dye looks like on plain paper. I made small marks on small pieces of caribou skin to experiment and the leather received the dye/ink very well. I did not try to mix balsam fir sap/resin with the dye. I did mix some dye with egg yolk and it went onto the paper very well. This is the first experimenting I did.


Balsam fir sap, also known as resin, doesn’t freeze in the bark during the winter. Therefore it is easy to harvest all year, but it is most plentiful during the spring. The sap should be clear light yellow. If it is white yellow, do not use it as it could be a sign that the tree is fighting a sickness. When the sap is collected, keep a cover on it and it should stay runny for quite a while. One species of coniferous tree has bark similar to balsam, but the needles are different. 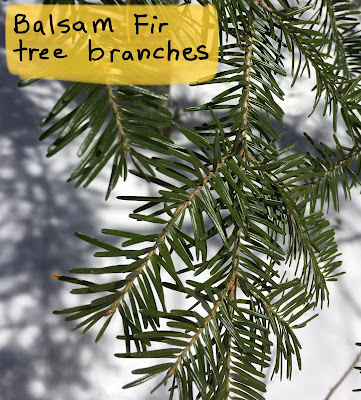 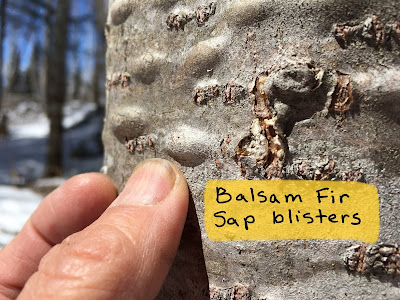 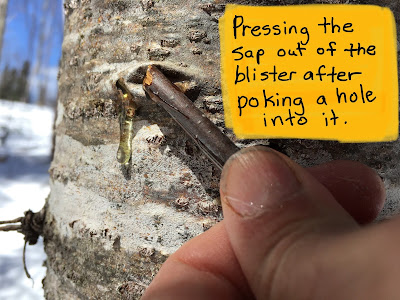 After poking a hole in the blister, I put my container (not included in this picture) right against the bark and under the blister to catch the sap. When collecting sap, it is important to remember not to use all the blisters on the tree, as sap is good for the tree. Always thank the tree for the sap you are harvesting. 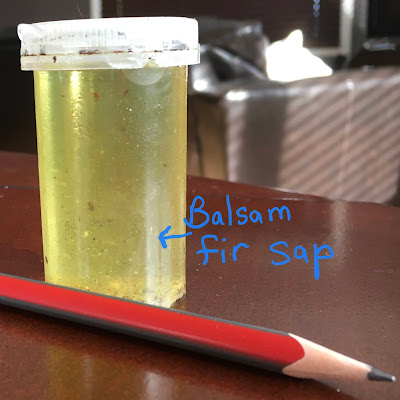 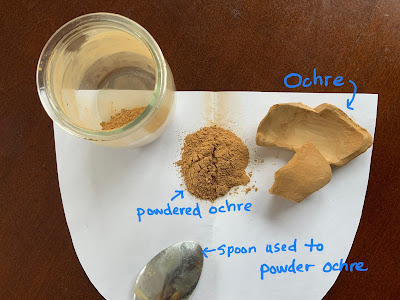 This ochre is the color of sienna. I found the ochre at a rock quarry near Ouje-Bougoumou in  April. Using a spoon, I scraped the ochre and it turned into a fine powder. There are no sand particles in this ochre. When liquid was added to the ochre, it turned into a darker sienna. 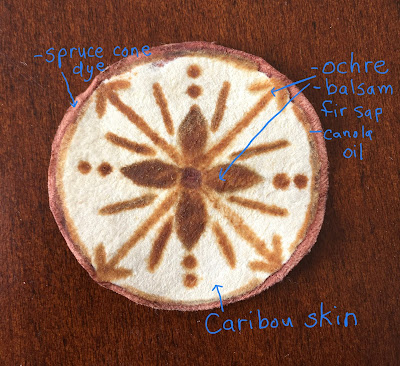 This is a 1 3⁄4 inch in diameter piece of white tanned caribou skin. In this piece I used ground ochre for a pigment and mixed it into balsam tree sap and canola oil to make my paint. At the edge of the skin I used the black spruce cone dye I made earlier to paint a border. I found that the oil mixed with the sap carried the pigment right into the skin. The sap helped to make the pigment stick to the skin. I am sure this paint is water resistant  but I have not tested this yet. 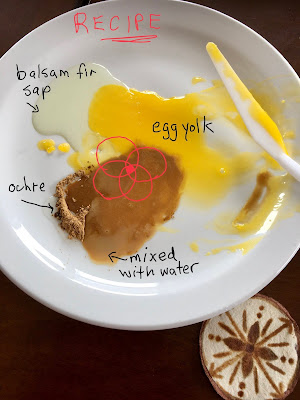 These are the ingredients I used to make the painting on watercolor paper below. I left out the canola oil because there is oil in the egg yolk. I used a chicken egg for this because I do not have access to fish eggs for now. Water mixes well with egg yolk, but not so well with grease. The water is good to thin the color, but I didn’t need to use a lot of water as the balsam fir and the egg yolk are liquid enough. The darker I want the brown, the less egg yolk I use. 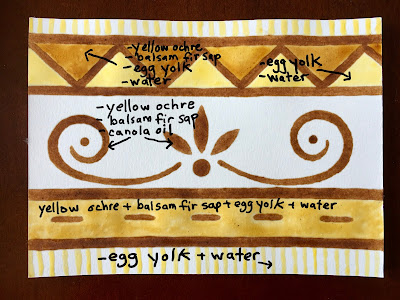 The brown lines are painted using ochre, sap and oil. I find this mixture soaks right into the watercolor paper and the pigment adheres very well to the paper due to the sap. These brown lines I painted on before I discovered I might not have to use oil when I use egg yolks.
The lighter brown has egg yolk mixed with sap and a little bit of water. I added the water to help the paint go into the paper. The light yellow in the triangles is egg yolk and water, with very little sap and no ochre. The thin yellow lines are just egg yolk and water, with no ochre. 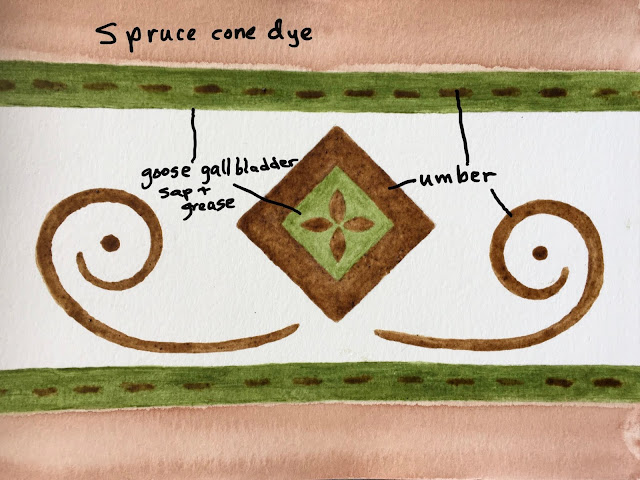 After receiving a gift of a whole goose during the 2020 hunting season, I kept the gall bladder to use as green paint. When I was a teenager I noticed that goose gall stained clothing a dark green and made a mental note that it would be a good paint. Now, here is my first example of using goose gall for green. I also found some raw umber while walking around Ouje-Bougoumou. It was easy to grind so I brought it home and mixed it with sap and goose grease. It worked very well as a pigment. I didn’t try it with egg yet. Over the summer hopefully I will have some fresh fish eggs to work with, instead of the store-bought chicken egg. I look forward to when I will experiment with all pigments on caribou skin.

These are the tools and ingredients that I used to make my paints.

I feel very excited by this experiment. I will occasionally continue experimenting with other pigments that are available throughout the year with the goal to make a small painted caribou-skin item – watch this space for updates on my progress.