In the months of January, February, and March 2020, I embarked on a journey to Ouje-Bougoumou, Mistissini, Eastmain, Chisasibi, and Whapmagoostui in Eeyou Istchee (Quebec). My journey was to facilitate workshops that focused on the designs painted on caribou hide coats and other items of clothing and other belongings. Aanischaaukamikw Cree Cultural Institute (ACCI) in Ouje-Bougoumou offered me the position to do the workshops based on my contemporary art practice, extensive cultural knowledge from my experiences living on the land, and because I had led research workshops for the same project in summer 2019. I accepted the position and it was an honour to be able to contribute to the reawakening of this art form related to my ancestors.

I was busy working on my degree show ’10,000 Drowned’ for my Master’s Degree in Fine Arts at the University of Regina at the end of 2019. I didn’t have much time to plan out my workshop before travelling to Ouje Bougoumou in January 2020. I quickly jotted down ideas on how I would deliver the workshops. I had already began preparing in August 2019 by exploring painting with ink on small pieces of caribou skin, canvas and paper. I liked the way it looked and began to get excited to teach the process to people at home in Eeyou Istchee.

Painting on caribou hide using pigments made from minerals found in nature was done for ceremonial purposes and also to beautify an object. When the  Europeans came to trade and introduced glass beads and embroidery thread, painting on caribou skin began to fade away, and many of the designs migrated to floral designs. Whereas before, the designs were very geometric, with a lot of straight and curvy lines. From what I can see, it seems the designs were inspired by the landscape, animals, plants, migration, and the sky in our region. The work of my ancestors was both highly detailed or very minimal. It seems it depended on the artists and the materials available to create with, which would obviously vary from season to season and year to year as we traveled through our territory. From the stories I read and heard, clothing, ceremonial hides and other items were painted so the animals can see them and being pleased with what they saw, would come towards the hunters to offer themselves to sustain us. This is how it was, every care was taken to be respectful to the animals, and with the painted caribou-skin coats. Even though we have no historic examples today I am sure that moose hide was also painted, with extra special care taken to honour them, as they are a big animal and can feed many people.

When I was facilitating the workshops, I had some resources with pictures and texts to use for discussion and for people to look through. The main book they looked at that has a lot of pictures of designs made by our ancestors are found in the book, “To Please the Caribou: Painted Caribou-Skin Coats worn by the Naskapi, Montagnais, and Cree Hunters of the Quebec-Labrador Peninsula,” by Dorothy Burnham, who was a Conservator at the Royal Ontario Museum in the late 20th century. For us, we found the photographs useful, but the text itself had a great deal of conjecture or opinions that are presented as fact, when there are many things that we will never know, or that we as Eeyou people have a completely different understanding of because of the depth of understanding our own culture, when compared to assumptions made by outsiders. On that note, we have a project report that is forthcoming in an upcoming edition of KULA: Knowledge Creation, Dissemination and Preservation Studies.

In my workshops and artistic practice inspired by the painted caribou belongings, I focused on where the inspirations for the designs come from and the reasons for them. I also talked about what I discovered from what I could understand based upon my own experiences living in Eeyou Istchee. I had watched my mother, grandmother and other women in Fort George[1] / Chisasibi, the community where I grew up, sew designs on clothing like mittens and moccasins. I noticed there was a lot of similarities between their design elements and the ancient designs of our ancestors. I was also drawing and painting similar designs when I was experimenting with art materials. I know that the natural environment of the Chisasibi territory where I grew up also influenced my work. I also think that the ability to create traditional designs comes from blood memory, from our DNA, our genetic makeup. We all inherit certain traits of our ancestors through our DNA. One of those traits is artistic creativity.

For the workshops we used ink and acrylic paint, paint brushes, calligraphy pens and goose feather quills. The surfaces used to paint on were paper, canvas, and leather. ACCI supplied two small caribou hides that had been fixed white, and the art supplies. This link takes you to the catalogue record for a painted hide created at the workshops in Summer 2019 – 2020.07.01 by Margaret and other Eeyou artists. The whole project has been funded by the Canada Council for the Arts, in their ‘Creating,Knowing and Sharing : The Arts and Cultures of First Nations, Inuit and Métis Peoples’ funding stream. The printed resources I got from the ACCI library. The photographs featured in this blog are of finished works made by participants, except for Whapmagoostui where students didn’t have time to finish what they started but they did continue on after I left.

Ouje-Bougoumou was the first community to hold a workshop. It took place in the Skills Workshop at Aanischaaukamikw (ACCI). During the workshops, participants explored working with the paint pigments and painting and drawing tools, gaining confidence in their creativity and enjoying the environment they were working in. The outcome of the workshop produced some nice work.
Mistissini was the next stop on my journey. With the assistance of Jane Voyageur, the cultural coordinator, I set up the workshop in the Neoskweskau Sports Complex. There happened to be a general assembly going on at the same time, so I had quite a few visitors watching the participants as they worked. There were different age groups who participated, including two children.

Eastmain was my third stop. We had the workshop in the Cultural Centre beside the school. Some people made designs while some people visited. One young girl came after school to paint on paper.  On the last day of the workshop, we had a feast of moose, fish, and ptarmigan.

Chisasibi is the place I come from and it was nice to be back there. We had the workshop in the Parish Hall. Some midwives who were training and working in Chisasibi also participated. Two children also came and very quickly picked up the concept of the designs and painted some on paper. Two men came to make something, one a small banner and the other painted on his hunting coat. 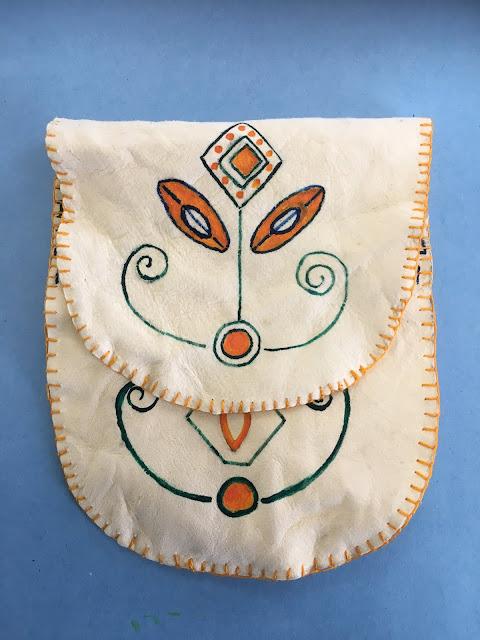 After the workshop in the Parish Hall was done, I went to the Cultural Camp to look for people who were not able to come to the workshop. I was in luck, I found two people, Janie and Charlie Pepabano, who were waiting for their stretched raw caribou hide to freeze so they could scrape it. I showed them designs from the written texts and the projects I was working on. They tried painting on paper and small pieces of caribou hide until it was time for them to scrape the frozen caribou hide.

Whapmagoostui, the only fly in community in Eeyou Istchee, is one place I hadn’t been to since 1977. I was surprised how much the place grew in size and population. The workshop was at Badabin Eeyou School  with the secondary level students in the Cree Culture/Language classroom. The teacher of the classroom was Louisa George, who had also attended the research workshops in Summer 2019. She had some pictures of traditional Cree subject matter that I used to show the students how the ancient designs could be related to things in the pictures. While working, the students often asked Louisa for the correct way to say words in Cree that related to what they were learning about the caribou, the land, the language, etc. I found out that the students are able to write whole essays in Cree.  Every time they came in the classroom, they were eager and started to work right away. But, because of the schedule of secondary school, students did not have the time to finish their projects in one week but they planned to complete them after I left. 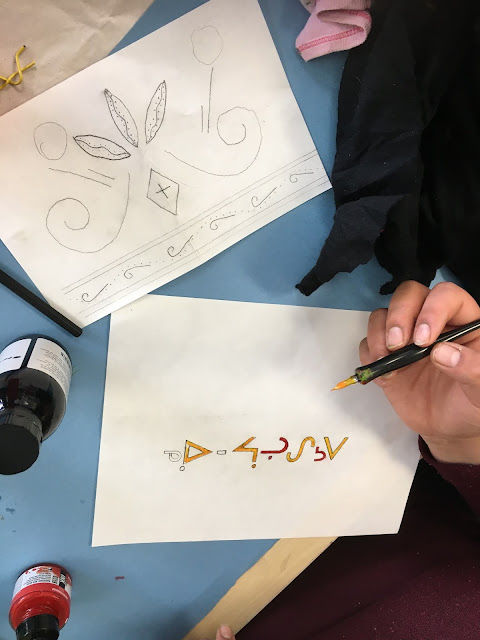 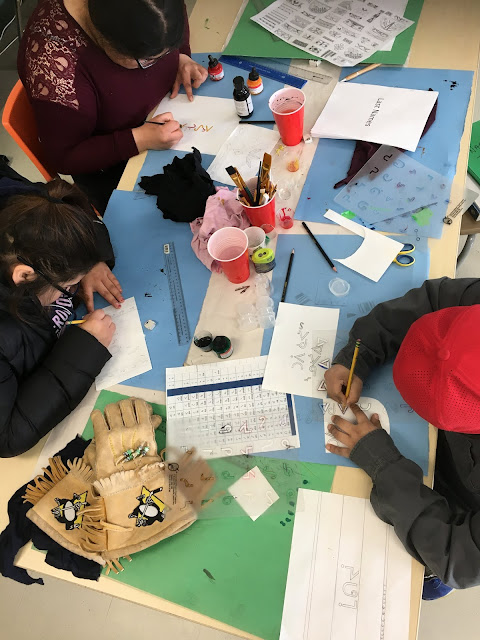 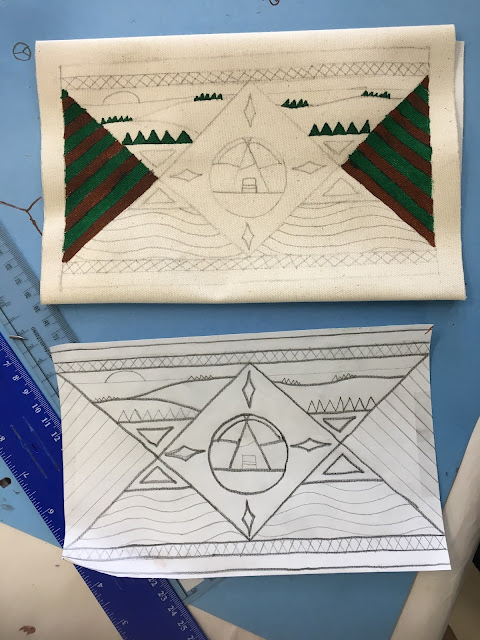 We had planned to do one final workshop at the hotel in Montreal where Cree patients and their families stay when they are there for health care than cannot be provided in the region. Unfortunately this was around the same time as the pandemic lock down starting in mid March, so we have had to postpone this workshop. It was at this point that I returned to Ouje Bougoumou, where I sheltered during the lockdown. During that time, I explored the area around Ouje and found minerals and other organic materials for my pigment experiments I wrote about in my previous blog, Making Paint Pigments.

When I teach art, I like to show participants sample of my work so they have a general idea of what a work in progress and finished work looks like. This is to help them generate their own ideas.

Below are samples of things I made for the painted caribou hide workshops.

This is a work in progress sample of a painted canvas bag that has yet to be sewn together. I used ink to paint with.

For more about Margaret’s art, please see this article in Nation magazine.

[1] Fort George was relocated in the 1980s to the current location of Chisasibi because of fears of flooding from a hydro electric dam.